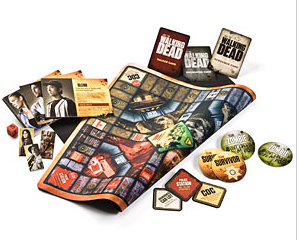 Making its debut in late 2010, The Walking Dead series has continued to win the hearts of most that watch it mainly owed to its captivating and creative features. With its record breaking 12 million plus viewers, the drama/horror series that is initially based on a comic book has been growing its fan base on AMC by the day and if you are not part of the action then you are certainly missing out on a lot. It is basically about a group of survivors trying to make it though the zombie apocalypse with the lead role being deputy sheriff Rick Grimes who leads the pack.

Owed to its large fan base and massive following, various limited editions merchandise have cropped up ranging from vinyl figures to the popular Walking Dead Board Game which has been causing shock waves literally ranking as one of the top zombie gifts this year. The game is equally captivating to say the least and it requires you to roll dices to move around the zombie-filled waste land. The whole essence is to try and capture four different locations by roll-to-move, where you encounter challenges in the form of cards. Along the way, you are given numerous but hard earned chances of acquiring different tools that will enable you to live through the next round varying from crossbows to shotguns. Even though you are advised to watch out for allies, it is more competitive in nature and in the end, you are bound to face two zombies alongside a single ally.

The game indeed offers an interesting match-up alongside your other zombie fanatics and you will not literally see the light of the day once you get into action thanks to its captivating nature immediately after locking yourselves in to play. It basically starts with six characters represented by innovatively designed stands that depict the various roles. You all start at a camp located in the middle of the board and the main aim is to move outwards to reach the four corners of the massive board. Along the way, you get to visit various destinations such as the department store, and old folks home among others with the sole aim of surviving an attack.

It has been creatively designed with authentic features that truly project a real struggle in an apocalypse only that the supplies and tools are not adequate to sustain the whole pack. What makes the game one of the best zombie gifts ever is the fact that it can be played by a large group of friends if not the whole family. The overall physical design of the board is easy on the eye and you do not have any reason whatsoever not to survive the apocalypse. Zombies fanatics have yet another reason to smile and indeed if the numerous reviews The Walking Dead Board Game has received is anything to go by, then you are in for a treat. It is however limited just like most Walking Dead merchandise and you should hurry and get your hands on it before it runs out of stock.