bDarkotic 12x18 Targets 8-Pack - Fine Print/bbrManufacture ID: 35645brbrEach hit on these splattering targets explodes in a white or neon green halo around the bullet hole so you instantly know where you hit the target. Shots specific to the head area result in a highly-visible neon green halo. Great for use with all firearms and calibers. br /br /Key Features: br /br /- These targets splatter with a halo when shotbr /- Great for use with all firearms and calibersbr /br /Size: 12 x 18 Fine Printbr /Quantity: 8 ...
Buy Now 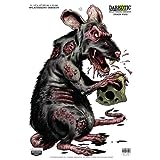 Darkotic Targets are the next great line of targets from Birchwood Casey. The target explodes in a white halo around the bullet hole, so you instantly know where you hit the target.

Perfect for a group outing, split with your friends, and Destroy the Undead. Life-sized Zombie target BLEEDS when you shoot it. Zombies can be shot more than 1000 rounds of assorted calibers. Designed for firearms, but works with ARCHERY in conjunction with suitable backstop. Zombie can be reused to finish off another day. Just weeks after the US Government announced the killing of Al Qaeda's top terrorist leader by the elite US Navy SEAL's; disturbing news leaked out of Coronado, CA that apparently, we have not seen the last of the World's most notorious symbol of terrorism, The Terrorist. This information leak comes from an extremely reliable source within the Navy SEAL organization, the special operations team who executed the killing of the World's most wanted extremist. The warning we received pleaded with Zombie Industries' to get the word out that he is in an absolute altered state of living. he is now an Undead