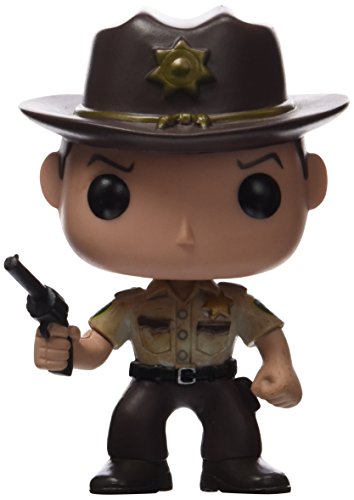 Don't Open - Dead Inside. Or do open because Rick and Daryl are trapped with Teddy Bear Girl Zombie! From Funko and AMC'sThe Walking Dead, The Walking Dead Pocket Pop! Mini Vinyl Figure 3-Pack Tin is perfect for collectors young and old! Featuring the same Pop! vinyl design you love now miniaturized, your favorite characters are now 1 1/2-inches tall. Bring Rick Grimes, Daryl Dickson, and the Teddy Bear Girl Walker along in your pocket, or display them in the nifty window box collector's tin.

Daryl Dixon with his iconic chopper! Based on the likeness of actor Norman Reedus, Daryl Dixon is wearing his angel wings-stitched biker vest and his trusty crossbow is across his back. Fan-favorite Daryl Dixon, from AMC's hit television series The Walking Dead, balances perfectly on the chopper or you can pull him off to display beside the bike. Rick Grimes and his group live in an unpredictable and perilous apocalyptic world - collect Daryl to help them survive!.