Life as you have known it exists no longer. Traditional commerce and frivolous living have given way. Enter a world where quick wits, guts and ingenuity mean the difference between life and death. In the Walking Dead Monopoly game you will wheel and deal for your very survival. Can you buy, sell, trade and backstab to survive a world of the dead? Optional speed play as you fight to the finish. Based upon the original series. Includes: Custom The Walking Dead Game Board; 28 The Walking Dead Title Deed Cards; 6 collectible tokens: Bucket of body parts, Katana, Ricks hat, Telephone, R.V, Lucille; 16 Scavenger Cards & 16 Supply Chest Cards; 32 houses renamed walls & 12 hotels renamed guard towers; 2 dice. 2-6 Players.

* Maps of every location will help you pinpoint the exact location of every object and collectable you'll need to crush the zombie hordes. * Complete object lists will reveal every object that you can use to combat the zombie menace. * Step-by-step instructions will demonstrate how to mow down the hordes of undead in the new zombie survival arena. * Detailed lists of all unlockables and collectables as well as steps to obtaining them all.

Hunkered aboard a sturdy military ship and triumphantly homeward bound, Xian Mei, Sam B and the rest of their battle-weary crew are able, at long last, to breathe a sigh of relief, or so they thought. Sure, they may have quelled the wave of zombies that attacked Banoi in Dead Island, but they forgot one rule that governs the sea, beware the Riptide. Just as their rescue helicopter touches down to safety on the ship deck, a furious monsoon ravages the hopes of our unfortunate protagonists and steers them on a direct course toward imminent doom, in yet another zombie-ridden town. An undead uproar is on the horizon once more and this time, the carnage and chaos promise to be more rampant than ever. Pack your suitcase and load your weapons for another vacation on Dead Island. Rife with all of the mutant-zombie mayhem of the original, plus unforeseen new plot twists, challenges and features, Dead Island Riptide drags you to an all-new danger zone in the town of Henderson. Once a luxurious watering hole for the yacht-collecting upper class and tree-hugging eco-tourists, Henderson is now a storm-soaked ghost town, where only wreckage and occasional boats remain. But this port locale on the island of Palanai is also your one last hope for survival. Rally together with the surviving members of the team, and orchestrate an elaborate defense using traps, fences and turrets to keep your brain-eating foes at bay. This time, the battle gets up-close and personal as a master of hand-to-hand combat joins the team as a fifth playable character. Take control of John Morgan's powerful fists and brawl against zombies like never before. Navigate the island by boat, the sole remaining mode of transportation Orchestrate a system of traps, fences and turrets to fend off the oncoming zombies and protect the humans who are still alive Adapt to changing visibility conditions and dynamic weather forces

Zombie Opoly: Zombie Opoly: The living dead, the undead? whatever you call them? they scare the pants off us! There?s just something unnerving about lumbering corpses that continue to attack after having limbs severed! And do they really want to eat our flesh and BRAINS! Zombie-opoly allows players to buy favorite zombies and increase the rent by buying Boxes of Flesh and trading them in for a Screaming Human. It?s all fun and games until someone gets sent to BURIED and is under ground and clawing their way to the surface for three turns! Choose your token and shamble to RRrrrrrr! You may soon be re-animated?or you may just be blood spewed and bitten. ISBN: 730799061707

The Last of Us: Amazing Strategies and Secrets

This guide takes you step by step through all you need to know about how, when, and which weapons to use, and how to get hold of all collectibles so you can advance in the game effortlessly. You'll find not only plenty of useful information and tips, but also secrets and strategies that will turn you into a pro and take you to levels you didn't know existed. Here is what this strategy guide includes: ? Weapons and how to use them right: detailed instructions (with images) of how to make the best of the nine types of weapons from the 9MM pistol, to the shotgun, and the Molotov cocktail ? Collectibles: how to get the trophies ? Endure and Survive: where to find and how to collect all comics ? I Got This: detailed instructions for collecting all training manuals ? Important tips so you don't miss out on crucial steps in the game All this and much more is available in this complete Last of Us weapons and collectibles guide.

The Last of Us Limited Edition Strategy Guide

SEARCHING FOR HOPEA modern plague has changed civilization as we know it. Twenty years later abandoned cities have been reclaimed by nature and the human population has been decimated. Joel and Ellie must work together to survive their journey across the United States. ONLY IN THE LIMITED EDITIONFIREFLY KEYCHAINThis exclusive 1.5 antique-finish metal replica keychain of the in-game Firefly Medal collectible is a must have for fans of this gritty and ground-breaking game. The Fireflies are an organized group of survivors that are working to rebuild civilization outside of the oppressive grip of the quarantine zones. Show your support for their causes with this unique game artifact. PREMIUM HARDCOVERAll of the game-tested strategies and multiplayer tips that are included in our Signature Series guide, packaged in a deluxe hardcover that features embossing and a premium finish. STRATEGY GUIDE FEATURESCOMPLETE WALKTHROUGHWe lead you step-by-step through the entire story from start to finish, so you can and every collectible and earn every trophy to achieve 100% completion. HIGHLY DETAILED SINGLE-PLAYER AND MULTIPLAYER MAPSOur maps pinpoint critical locations in every area. Find each and every hidden collectible and gather important crafting materials. MULTIPLAYER COVERAGEExpert tactics for every single aspect of multiplayer.

This is a core set and requires no other Munchkin set to play. Includes 168 cards, one six-sided die, and a rulesheet. Not even death can stop your Munchkin game! Steve Jackson's macabre card ideas and John Kovalic's disgusting art . . . what more do you need to know?

High quality Call of Duty Black Ops II mouse pad that is perfect for gamers and fans alike. Show off your passion for Black Ops II with this mouse pad or use it to compliment your gaming computer.

Stubbs the Zombie in Rebel Without a Pulse

From the Executive Producer of Halo, comes Stubbs the Zombie in Rebel Without a Pulse. You play as Stubbs, an undead antihero who takes on a futuristic city using nothing but his own carcass and the weapons of his possessed enemies. This third-person action game uses the Halo engine and integrates tongue-in-cheek humor and a strong storyline with innovative combat. Be the Zombie!

World War Z 2014 Card Game: A zombie outbreak has gripped the entire world. Be the first to secure your home continent against the zombie threat using weapons and soldiers. Including special elite forces. Use powerful raging zombies to prevent your opponents from reaching their goal. Survive the pandemic and recalim your continent from the Z's to win the game!

The new Wii U console introduces the Wii U GamePad, a controller with a 6.2-inch touch screen that redefines how people interact with their games, their entertainment and one another. 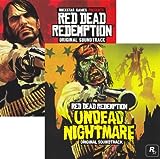 Available together in their official deluxe CD releases only for a short time, the soundtracks to Red Dead Redemption and the follow-up Undead Nightmare are must haves for any fans of the games or video game scores. ABOUT THE MUSIC OF RED DEAD REDEMPTION: Composed by the critically acclaimed recording artists Bill Elm and Woody Jackson and produced by David Holmes, the Red Dead Redemption Soundtrack Album is a lush and emotive score that captures the haunting sound of the dying American West and Mexico at the turn of the century. Filled with sweeping strings, martial timpani, and piercing horns, this music was performed on authentic instruments of the period. Additionally, Jose Gonzalez and Ashtar Command, both composed wholly original songs in "Far Away" and "Deadman's Gun" respectively for the soundtrack album. William Elliott Whitmore gave a haunting a cappella rendition of the western standard "Bury Me Not On The Lone Prairie", while Jamie Lidell submitted a special edit of his song "Compass". Each vocal track adds a dually authentic yet contemporary flair to the atmosphere of the album. ABOUT THE MUSIC OF RED DEAD REDEMPTION: UNDEAD NIGHTMARE: Acclaimed composers of the original Red Dead Redemption soundtrack, Bill Elm and Woody Jackson return for the terrifically spooky soundtrack to Red Dead Redemption: Undead Nightmare. Radically transforming the beautiful frontier landscapes of the original game into a B-movie zombie horror apocalypse, Undead Nightmare has a suitably eerie instrumental score accompanied by epic Southern Gothic rockabilly tracks from guest performers, Kreeps and Misterio.

Yes it's Fluxx with Zombies. Zombie Fluxx takes the award-winning card game Fluxx and cranks up the fun with a Zombie uprising. The Zombies arrive in the form of a new type of card, called the Creeper, which hangs around in front of you, preventing you from doing anything.