Every year zombies end up being one of the most popular costumes simply because of the fascination of the zombie hysteria along with the fun of "becoming" a zombie. It's easy to have your zombie themed halloween with our help. 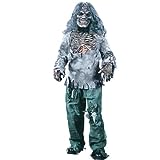 Your boy will freak out his friends as he shuffles down the street in the Zombie Doctor Costume for Child. This costume includes a torn teal shirt with a gory exposed PVC chest, matching torn pants with an exposed rotted knee, bloody latex gloves, a decaying bloody zombie mask, a surgical cap and a surgical mask. Your child will look like part of the undead horde alone or with friends in any of our other zombie costumes.

Do they have half-pipes in heaven? Find out when you put on a Zombie Sk8r costume this Halloween! The baggy short-sleeved T-shirt is decorated with a picture of a skateboarding zombie riding his own tongue. The included half mask will give you a large cap and disintegrating face so old its eyes are falling out.

The second of three masks to kick off Trick or Treat Studios' new EC Comics collection for 2015! Sculpted by Justin Mabry. rntLiven up the party when you arrive in this Living Dead Girls Zombie Costume. The undead outfit includes a tattered dress and footless tights. Make up a story about how you died and what brought you back - have a hauntingly good Halloween.rntrnrntrnttThe Living Dead Girls Zombie Costume consists of a black stretch dress with brown tattered layer on the body of the dress; long black sleeves; tatter edge hem; scoop neck and black run/tattered footless tightsrntrnttClosure (Zipper; Tie; Velcro&hellip;)- Dress: PulloverrntrnttMaterials/ Fabrics- Dress: Knit PolyrntrnttWash/Care Instructions- HAND WASH SEPARATELY IN COLD WATER. ONLY NON CHLORINE BLEACH WHEN NEEDED.LINE DRY. DO NOT IRON LEGGINGS HAND WASH COLD WATER. DO NOT BLEACH LAY FLAT TO DRYrn

If your son is dying to be undead for Halloween, he'll love this scary and gruesome Child Skeleton Zombie Costume. This deluxe outfit includes a tattered shirt, pants, and chestpiece with exposed bones and green rotting flesh. It comes with matching skeleton gloves and a creepy and menacing mask with a sheer green veil.

Looking for the best selection of Costumes for any occasion -then you've come to the right place. Choose this item made by the premier manufacturer for costumes, props, and theatrical wear. We supply ice shows, circuses, TV, amusement parks, Broadway, and

Do they have half-pipes in heaven? Find out when you put on a Zombie Sk8r costume this Halloween! The baggy short-sleeved T-shirt is decorated with a picture of a skateboarding zombie riding his own tongue. The included half mask will give you a large cap and disintegrating face so old its eyes are falling out.

Oz has really gone to shambles these days. What, with the zombies trudging along the Yellow Brick Road, the only people safe there these days are the Tin Woodsman and the Scarecrow, since they have no flesh for the undead to eat. This zombie Kansas Girl costume suggests that their friend wasn't so lucky.