Twas the Zombie Night Before Christmas: A Zombie Kids Book 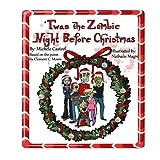 A twisted, yet kid-friendly, take on the traditional Christmas poem by Clement Clarke Moore, Twas the Zombie Night Before Christmas invites you into the life of the Rancid Family who is trying to survive AFTER the zombie apocalypse. The entertaining and down-right funny take on how zombies deal with Christmas is only heightened by the delightful illustrations that will have both children and parents laughing uncontrollably. This will be your new Christmas classic to be read year after year.

Horror for the Holidays

He's faced his grim past, gruesome present and now his ?ghoulish future filled with fright. Can Ebeneezer Scrooge change his ways and undo the curse that's destroying humanity? Forget next Christmas, if Scrooge fails, there won't even be a tomorrow!

Twas the Zombie Night Before Christmas (A Zombie Kids Book) 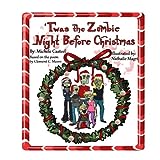 A twisted, yet kid-friendly, take on the traditional Christmas poem by Clement Clarke Moore, Twas the Zombie Night Before Christmas invites you into the life of the Rancid Family who is trying to survive AFTER the zombie apocalypse.The entertaining and down-right funny take on how zombies deal with Christmas is only heightened by the delightful illustrations that will have both children and parents laughing uncontrollably. This will be your new Christmas classic to be read year after year.

Gather your family close, board up the doors, and heed well the tale of Ebenezer Scrooge - a man whom no fire could warm, whose cold heart pumped ice through his veins and whose lips uttered a firm BAH! to any sort of happiness. Learn from his experience as he is visited by the undead corpse of his old friend, Jacob Marley, on Christmas Eve. And join him on his journey to Christmases past aided by another corpse intent on showing Scrooge the origin of the Hungry Death consuming the land. God help us, every one! Collecting MARVEL ZOMBIES CHRISTMAS CAROL #1-5.

The snow is falling, the holidays are approaching and?It?s Beginning to Look a Lot Like Zombies! This delightfully depraved book of classic Zombie Christmas carols by Michael P. Spradlin is guaranteed to spread Yuletide cheer to all those good boys and ghouls who devoured the monsterNew York Times bestsellers Pride and Prejudice and Zombiesand World War Z, as well as fans of 28 Days Laterand Shaun of the Dead. With an introduction by the inimitable Christopher Moore?bestselling author ofBloodsucking Fiends, You Suck, and the classic? heartwarming tale of Christmas terror?The Stupidest Angel?It?s Beginning to Look a Lot Like Zombies is a great gift for stuffing into a Christmas stocking?provided you remove the bloody severed foot first!

I Am Scrooge: A Zombie Story for Christmas

Award nominated SF author Adam Roberts takes on Dickens in this festive zombie gorefest.Marley was dead. To begin with.The legendary Ebenezeer Scrooge sits in his house counting money. The boards that he has nailed up over the doors and the windows shudder and shake under the blows from the endless zombie hordes that crowd the streets hungering for his flesh and his miserly braaaaiiiiiinns!Just how did the happiest day of the year slip into a welter of blood, innards and shambling, ravenous undead on the snowy streets of old London town?Will the ghosts of Christmas Past, Present and Future be able to stop the world from drowning under a top-hatted and crinolined zombie horde?It's the Dickensian Zombie Apocalypse - God Bless us, one and all!

The legendary comics creator Dean Motter returns with Mister X: Razed! In the retro-futuristic metropolis of Radiant City, its mysterious creator, Mister X, must protect the city and its residents from themselves as the architecture of the city itself is a danger to all those within it. Jilted lovers at Christmas, the mystery of a disappearing skyscraper, a disgraced magician's heinous trap, and a zombie outbreak await you in the newest collection of the Mister X saga, collectingMister X: Razed #1 4 and Mister X: Frozen Assets from Dark Horse Presents #33-35!

Mall Santa Barney is coming to the end of his shift when customers suddenly begin transforming into blood thirsty zombies. Can he make it out alive? The first in the Zombie Holiday Series by Devin Coldwell.***Approximately 15,000 words.***

Jack and Jill Went Up to Kill

Michael P. Spradlin (outrageous words) and Jeff Weigel (eye-popping illustrations)-the seriously twisted minds that brought you the New York Times bestselling Christmas carol tome It's Beginning to Look a Lot Like Zombies and Every Zombie Eats Somebody Sometime, a book of Zombie love songs-have arisen once more, this time to devour Mother Goose raw! Jack and Jill Went Up to Kill is a hilarious volume of zombie nursery rhymes designed to tickle the (exposed) funnybone of every World War Z, Shaun of the Dead, Zombieland, Pride and Prejudice and Zombies, and The Walking Dead fan on either side of the grave!

There will be no singing this Christmas - only screaming! Marvel presents Charles Dickens' classic A Christmas Carol - with a ghoulish twist! As London is overrun by a plague known as the Hungry Death - a disease spreading rapidly among the surplus population - the poor turn into the undead and hunger unendingly. When the disease spreads from the workhouses to the public, only one person can turn the zombie tide and save Christmas for all: that humbug, Ebenezer Scrooge. God help us, everyone. COLLECTING: ZOMBIES CHRISTMAS CAROL 1-5

This exciting and bloodthirsty story tells of the sour and stingy Ebenezer Scrooge and his epic journey of transformation and redemption, brought about by a plague of ravenous zombies. After the supernatural visitations of the long dead Jacob Marley, himself killed by zombies and the Ghosts of Christmases Past, Present, and Yet to Come he comes to realise that he is London's only hope. In a city under siege by the undead there is only one man with the character and sense of mind able to stand in their way. A thrilling and unusual twist on the festive tale originally written by Charles Dickens.

All I Want for Christmas Santa is You: A Zombie Children's Book (My Little Brother is a Zombie Book One 4)

Ryan Robertson is the only human male in the Ouachita clan of big cats, and navigating the world of shifters for four years has been tricky. Worth it though, if he can just convince the snarky cougar he's had his eye on that he could make her happy. But the werecat of his dreams isn't looking for a happily ever after, or even a happy for now. Not with a human anyway, and she's made it abundantly clear. All he can do is pick up the pieces of his shattered heart and walk away with his head held high.Layna Blackfoot has been the glue that held her clan together when the traditions of their people almost tore them apart. Now the laws have changed and she can finally tell Ryan the truth. He's her intended mate, and if he will just fight for them, her cougar would give herself to him completely and forever. But before she can confess, he's gone. Out the door like a true male, with only the briefest kiss beneath the mistletoe.When a new danger threatens Layna and the clan, only Ryan can help her. But this Christmas, the human will require a little more from his kitty in return. He wants it all. Her past, her future, her everything. Layna's the only thing on his Christmas list, and he's been good for too long. If he's lucky, they'll be merrily mated by New Year's Eve.***Book 3 of the Ouachita Mountain Shifters series, which is a spin-off of the Dirt Track Dogs series. To experience more of these characters, read the prequel, A Mate's Wish, or the Dirt Track Dogs books.***Contains adult language and explicit sex scenes. Intended for mature audiences only.