This ANDREW LINCOLN THE WALKING DEAD SIGNED AUTHENTIC 8X10 PHOTO PSA/DNA #W11257 has been certified authentic. It will include the PSA/DNA numbered hologram and matching Certificate of Authenticity.

In the beginning of The Walking Dead series, we are introduced to deputy Rick Grimes. After waking from a coma in an abandoned hospital, Rick finds the world he knew gone. Bound to uphold the law, Rick is seen wearing his full deputy uniform in many of the iconic scenes from season 1, such as his encounter with the Bicycle Girl walker and riding horseback into the city of Atlanta. This figure comes with approximately 22 points of articulation, full deputy uniform with hat and pistol.

The time has come. 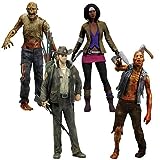 Show everyone who your favorite character of the Walking Dead is with this Daryl Dixon shirt! This 100% cotton shirt features Walking Deads most famous character Daryl riding a motorcycle with the quote I Aint Nobodys Bitch on it. On the reverse side features Wings starting at the shoulders and reaching the bottom of the shirt. 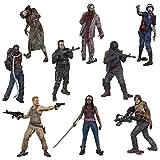 Build your own horde of walkers, or group of surviving humans to recreate the post-apocalyptic world of the hit television series, AMC's The Walking Dead. Each blind bag contains 5-7 interchangeable body parts to help bring a favorite character or a flesh-eating walker to life. Construct your army of survivors and hordes of Walkers, then recreate your favorite scenes from the show.

Carl Grimes, who started out as a shy little boy is season 1, has now become battle hardened by the dramatic events of the most recent seasons. In season 4, Carl's abilities to protect himself and other survivors have greatly improved. His youth still shows at times, losing one of his shoes during a preventable walker encounter and indulging in a scrumptious can of pudding.