Zombies at the Door: Planning for the Inevitable 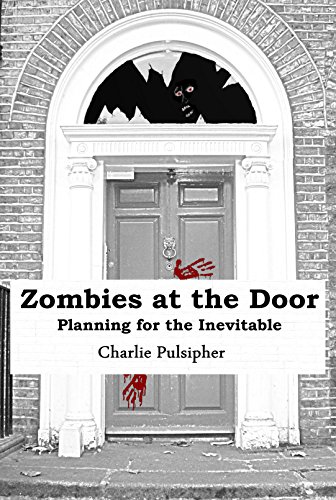 Get ready for a funny Advice & How-To guide to the coming Zombie Apocalypse using humor and practical knowledge together to help you survive*We all know it can happen, will happen. Be prepared and have a laugh at the same time. This basic manual will make sure you are ready to face the zombie hordes and walk you through where to meet, find weapons and food, and set up camp. It may even give you hope as you huddle in the bathroom stall at the mall.Seriously though, don't go to the mall!Learn the glow stick technique ...
Buy Now

Zombie Apocalypse Preparation: How to Survive in an Undead World and Have Fun Doing It!

We guarantee this is the only tool you need to survive the zombie apocalypse. OK, that’s not really true. But when the SHTF you’re going to want a survival guide that’s not just geared toward day-to-day survival. You’ll need one that addresses the essential skills for true nourishment of the human spirit. Living through the end of the world isn’t worth a damn unless you can enjoy yourself in any way you want. (Except, of course, for anything having to do with abuse. We could never condone such things. At least the publisher’s lawyers say we can’t.) We can’t guarantee this guide will save your life. But we can guarantee it will keep you smiling while the living dead are chowing down on you. “This book means I’ll Never Have to wipe myself with a leaf during the apocalypse.” —well known zombie survival guide author “I now have six patients suffering from PTSD because of this book.” —some psychiatrist “I couldn’t put it down... Mostly because it was glued to my hands.” —victim 17 “This book is now on our ‘Required Reading’ list.” —guard at Guantanamo Bay “Amused and terrified. How are the writers not in prison for this?” —random person that was handed the book with a note that read ‘review within 24 hours or your kitten dies’

The official U.S. Army field manual―with more than 100 illustrations of zombie combat techniques The United States Army is prepared for every kind of combat. This is the Soldier's Zombie Combat Field Manual. It explains how to perform the combat skills needed to survive on the battlefield against the hordes of the Undead. All Soldiers, across all branches, must learn these basic skills in preparation for battle against reanimated corpses. Combat against the Undead is chaotic, intense, and shockingly destructive. In a soldier's first battle, he will experience the confusing and often terrifying sights, sounds, smells, and dangers of the zombie battlefield―and he must learn to survive and win despite them. He will be surrounded by destruction, death, and the Undead. The air will be filled with the smell of explosives, propellant, and decaying flesh. He will hear the screams of a devoured comrade. But, if he follows the training provided in this book, he can win in battle against zombies and return home with honor. * Individual Readiness * Zombie Combat Care and Preventive Medicine * Environmental Conditions * Cover, Concealment, and Camouflage * Fighting Positions * Movement * Urban Area Procedures * “Every Soldier is a Sensor” * Zombie Combat Marksmanship * Communications * Survival, Evasion, Resistance, and Escape