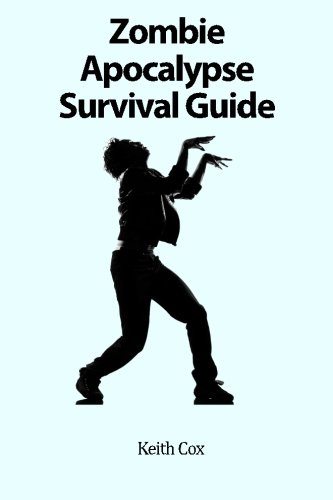 Are you, too, in constant fear of an impending Zombie Apocalypse? Do you worry that you will be one of the first to be lost to this devastating plague of the undead? You are not alone. The longer you wait to prepare yourself for the uprising of the undead, the less likely it is that you will survive. The time to prepare yourself and your loved ones is now! This guide will teach you all the vital skills and knowledge that you must possess in order to be one of the survivors when this devastating event occurs. If you are ...
Buy Now

Zompoc: How to Survive a Zombie Apocalypse

Meticulously researched and vigorously detailed this important survival manual is the most detailed and up-to-date book you will find to keep you and your family safe during the Zompoc (Zombie Apocalypse). This book is unique in its coverage of all Zombie strains from the viral infected fast zombies through to the shambling re-animated undead. All subjects from zombie identification, first-aid, escape techniques, household defence, combat techniques and raiding through to bartering, supplies, vehicle modification, weapons and convoy structure are all covered in great detail. With this book you can prepare for the day the Zompoc strikes and be ready to fight back and eradicate the Zombie menace from our streets. This book is illustrated throughout and even contains full plans and instructions for a post-Zompoc rebuilding of civilisation!

In NERF Zombie Tag games, Zombies don’t need to be alert like humans do; they have stun timers. This is The Zombie Apocalypse, Life or Death, “One and Done” -- once you are tagged and infected you are out for the duration, stuck being a Zed. This cannot be stressed enough. For players who have invested a lot of time and preparation into their NERF gear and load-out, a tag early in the game can be heart breaking. Don’t let this be you - or your squad mates. “Victorious warriors win first and then go to war, while defeated warriors go to war first and then seek to win” ― Sun Tzu, The Art of WarThe Zombie Tag Survival Guide – Human Field Manual is your most powerful weapon against the unceasing and relentless undead horde. Based on and adapted from US Army and USMC methodology, this book covers all the basic essentials a Zombie Tag player or Squad of Human Players needs to know to not only survive, but achieve ultimate human victory in a NERF Zombie Tag game. Utilizing trusted, proven tips from years of NERF combat experience, The Zombie Tag Survival Guide is a treasure trove of tactical and strategic information, including how to gear up as a beginner, how to organize effective human fire teams and squads, the most effective formations and movement strategies, and how to keep you and your squad mates alive in any organized Zombie Tag game.Don’t be caught half-stepping into battle unprepared. This is a book that will save not only your own life, but possibly holds the key to ultimate victory for all of humanity.

The Ultimate Guide to Zombies

The Ultimate Guide to Zombies is your handbook to all things zombie. It traces the history of zombies from tales of Haitian Voodoo through their portrayal in movies, games, and books to their current status on TV's "The Walking Dead". The book discusses what might cause a zombie outbreak, the anatomy of a zombie's brain, and how to effectively deal with them. It also covers the way zombies have been used by various organizations and the media to further their own ends. Lastly, the book has information about zombies in movies, music, advertising as well as information on zombie survival camps, zombie weddings, and world-wide zombie events. This book is a must for any zombie fan or for anyone wanting to understand the planetary phenomena they have caused.