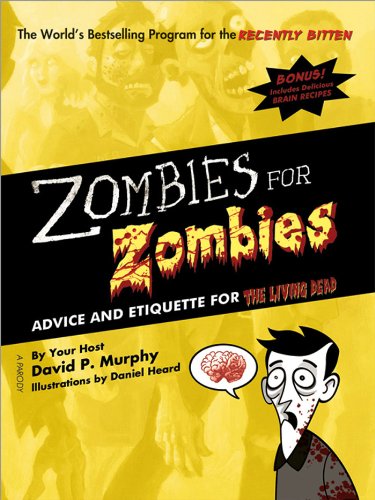 So, you've been bitten by a zombie? Bummer. But there's no need to panic! Yes, your life will be undergoing a major transformation, but this doesn't have to be the end-all it once was when the Disaster first hit. There have been significant breakthroughs in the last decade in helping you keep significant parts of your wit and dignity. Together we can limit the damage. Zombies for Zombies is a motivational guide designed specifically to make a profound difference in your accidental, strange new life. You say you don't want to become another one of ...
Buy Now View our feature on Meljean Brook's "The Iron Duke." First in an all-new series where seductive danger and steampunk adventure abound in the gritty world of the Iron Seas. After the Iron Duke freed England from Horde control, he instantly became a national hero. Now Rhys Trahaearn has built a merchant empire on the power-and fear-of his name. And when a dead body is dropped from an airship onto his doorstep, bringing Detective Inspector Mina Wentworth into his dangerous world, he intends to make her his next possession. But when Mina uncovers the victim's identity, she stumbles upon a conspiracy that threatens the lives of everyone in England. To save them, Mina and Rhys must race across zombie-infested wastelands and treacherous oceans-and Mina discovers the danger is not only to her countrymen, as she finds herself tempted to give up everything to the Iron Duke.

NEW YORK TIMES BESTSELLER, NOW A MAJOR MOTION PICTURE “Gruesome yet poetic…highly original.” —The Seattle Times “Dark and funny.” —Wired “A mesmerizing evolution of a classic contemporary myth.” —Simon Pegg “A strange and unexpected treat…elegantly written, touching, and fun.” —Audrey Niffenegger, author of The Time Traveler’s Wife “Has there been a more sympathetic monster since Frankenstein’s?” —Financial Times In Warm Bodies, Isaac Marion’s New York Times bestselling novel that inspired a major film, a zombie returns to humanity through an unlikely encounter with love.“R” is having a no-life crisis—he is a zombie. He has no memories, no identity, and no pulse, but he is a little different from his fellow Dead. He may occasionally eat people, but he’d rather be riding abandoned airport escalators, listening to Sinatra in the cozy 747 he calls home, or collecting souvenirs from the ruins of civilization. And then he meets a girl. First as his captive, then his reluctant house guest, Julie is a blast of living color in R’s gray landscape, and something inside him begins to bloom. He doesn’t want to eat this girl—although she looks delicious—he wants to protect her. But their unlikely bond will cause ripples they can’t imagine, and their hopeless world won’t change without a fight.