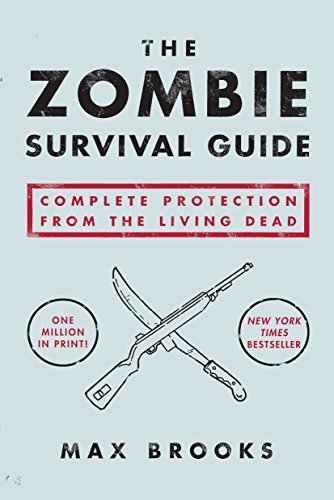 The Zombie Survival Guide is your key to survival against the hordes of undead who may be stalking you right now. Fully illustrated and exhaustively comprehensive, this book covers everything you need to know, including how to understand zombie physiology and behavior, the most effective defense tactics and weaponry, ways to outfit your home for a long siege, and how to survive and adapt in any territory or terrain.Top 10 Lessons for Surviving a Zombie Attack 1. Organize before they rise! 2. They feel no fear, why should you?3. Use your head: cut off theirs.4. Blades don’...
Buy Now

The Zombie Combat Manual: A Guide to Fighting the Living Dead

During a zombie outbreak, 98% of individuals will have to destroy an undead opponent without the aid of a firearm. Will you be ready? The Zombie Combat Manual is a comprehensive guide that demonstrates how anyone, from seasoned fighter to average citizen, can become an effective warrior in the inevitable battle against the undead. With detailed illustrations and firsthand accounts from zombie combat veterans, this manual provides readers with the information they need to emerge victoriously from a close combat encounter with a walking corpse. Now is the time to learn how to survive a hand-to-hand battle against the advancing army of the undead - lest you fall prey to their growing ranks.

Richard Matheson's I Am Legend

Matheson's classic novel of fear and vampirism-the tale of the last human on an Earth overrun by the undead-returns to graphic novel format in a single volume collection of four long out-of-print books.

It's one month after a global disaster. The most "developed" nations of the world have fallen to the shambling zombie masses. Only a few pockets of humanity survive — in places rife with high-powered weaponry, such as Somalia. In New York City, the dead walk the streets, driven by an insatiable hunger for all things living. One amongst them is different; though he shares their appetites he has retained his human intelligence. Alone among the mindless zombies, Gary Fleck is an eyewitness to the end of the world — and perhaps the evil genius behind it all. From the other side of the planet, a small but heavily-armed group of schoolgirls-turned-soldiers has come in search of desperately needed medicine. Dekalb, a former United Nations weapons inspector, leads them as their local guide. Ayaan, a crack shot at the age of sixteen, will stop at nothing to complete her mission. They think they are prepared for anything. On Monster Island they will find that there is something worse even than being undead, as Gary learns the true price of survival.