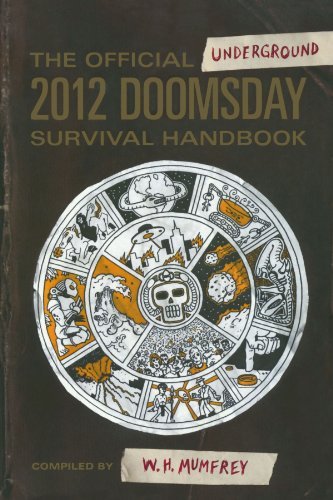 The End is Nigh!Nuclear holocaust, supervolcano, asteroid impact, mega tsunami, alien invasion, zombie outbreak? Will the world end with a whimper or a bang?W.H. Mumfrey covers it all. From doomsday predictions that have occurred throughout history, to how the Mayans might have really figured it out, to analysis of movies that offer tips on how to survive a variety of scenarios, he leaves no stone unturned.However the end arrives, Mumfrey prepares you for what to expect after the apocalypse. He provides valuable pointers on how to survive a litany of doomsday scenarios&#151and how to rebuild ...
Buy Now

So, you've been bitten by a zombie? Bummer. But there's no need to panic! Yes, your life will be undergoing a major transformation, but this doesn't have to be the end-all it once was when the Disaster first hit. There have been significant breakthroughs in the last decade in helping you keep significant parts of your wit and dignity. Together we can limit the damage. Zombies for Zombies is a motivational guide designed specifically to make a profound difference in your accidental, strange new life. You say you don't want to become another one of those ghastly creatures you see on the news out in the Tempe Containment Zone? You don't have to—if you follow the great advice inside, including: How to dress for your new lifestyle Handy recipes for brains Fitness ideas for keeping you somewhat energetic New skin-care techniques to help ward off "rotting flesh syndrome" How to overcome that darned zombie social stigma Dance steps for the motor-impaired Completely Revised and Updated Since the Containment Zone Disaster! "Face it, being bitten by a zombie is inevitable. Thanks to this indispensable book, we can finally stop making survival plans and start making the most of our new lives as zombies. Even for the uninfected, Zombies For Zombies is a scream." —Daniel H. Wilson, author of How to Survive a Robot Uprising

Pride and Prejudice and Zombies: The Graphic Novel THE NEW YORK TIMES BESTSELLER--NOW AN EYE-POPPING GRAPHIC NOVEL OF MANNERS, MORALS, AND BRAIN-EATING MAYHEM It is known as "the strange plague," and its unfortunate victims are referred to only as "unmentionables" or "dreadfuls." All over England, the dead are rising again, and now even the daughters of Britain's best families must devote their lives to mastering the deadly arts. Elizabeth Bennet is a fearsome warrior whose ability with a sword is matched only by her quick wit and even sharper tongue. But she faces her most formidable foe yet in the haughty, conceited, and somehow strangely attractive Mr. Darcy. As the two lovers meet in the ballroom and on the battlefield, they'll soon learn that nothing--not even bands of ninjas, hordes of flesh-eating zombies, or disapproving aunts--can stop true love.

Zombie Fallout It was a flu season like no other. With fears of contracting the H1N1 virus running rampant throughout the country, people lined up in droves to try an attain one of the coveted vaccines. What was not known, was the effect this largely untested, rushed to market, inoculation was to have on the unsuspecting throngs. Within days, feverish folk throughout the country, convulsed, collapsed and died, only to be re-born. With a taste for brains, blood and bodies, these modern day zombies scoured the lands for their next meal. Overnight the country became a killing ground for the hordes of zombies that ravaged the land. This is the story of Michael Talbot, his family and his friends. This is their story a band of ordinary people just trying to get by in these extra-ordinary times. When disaster strikes, Mike a self-proclaimed survivalist, does his best to ensure the safety and security of those he cares for. Book 1 - Of the Zombie Fall-Out Trilogy, follows our lead character in his self-deprecating, sarcastic best. What he encounters along the way leads him down a long dark road always skirting on the edge of insanity. Can he keep his family safe? Can he discover the secret behind Tommy's powers? Can he save anyone from the zombie Queen? - A zombie that seems by all accounts to have some sort of hold over the zombies and Mike himself.Encircled in a seemingly safe haven called Little Turtle, Mike and his family together with the remnants of a tattered community while not fighting each other, fight against a relentless, ruthless, unstoppable force. This last bastion of civilization has made its final stand. God help them all.