The Walking Dead TV Board Game 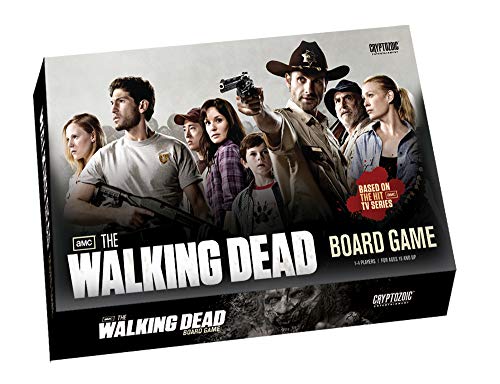 View larger View larger The Walking Dead! In The Walking Dead Board game, only the strong survive. The weak turn into walkers, and then turn against their former friends! Fight your way through zombie-infested Atlanta with your fellow survivors. Grab some weapons to clear a path. Visit destinations like the department store, the police station, old folk's home, and the CDC. Find the tools you’ll need to live another day like weapons, allies, a car, or a swift mount. Be the first to reach the Center for Disease Control! Take on the role of Rick, Andrea, or ...
Buy Now

Players: 1 to 4 Playing Time: 100 minutes Ages: 12 and up Contains: 20 double sided board tiles. 80 build tokens. 135 standard cards. 21 non-standard goal cards. 6 non-Standard Scenario cards(Main, co-op, PVP, etc.). 1 point tracker. 12 dice (8 red, 4 blue). 20 page rule booklet. 30 zombie miniatures (15 male, 15 female). 4 squad boards. 8 squad miniatures (4 unique males, 4 unique females) pick 2, snap to unique colored base. 1 dog miniature. 4 colored point tracker meeples. Zpocalypse is a survival board game set in a post-apocalyptic wasteland. Two to four players start in a basement/fallout shelter which can lead out to several base locations or even through the tunnels to sewer grates throughout the transformable board. The survivors are trying to make it day to day in a world torn apart from the walking dead. As in any survival game, one needs food, guns, ammo, and more. Players go out into the wasteland and scavenge for supplies, or perhaps to find a new gun or melee weapon to fend off the next zombie attack. In addition to gathering supplies, each player forms and controls his own squad and each squad works to fortify the bases. Your walls and barbed wire would not hold the dead for long, however, and they are getting hungry. Characters receive victory points for killing zombies, building defenses, and successfully completing goals. Victory points show who is soldiering on the best in this wasteland. The final tally of points determines the winner. Victory points also act as experience points for leveling up a character. The game combines combat, tactics, resource collecting, character development, team play, and strategy towards the goal of surviving in the Zpocalypse!

Beware the things that go bump in the night! The Glauerdoom Moor is a haunted land filled with restless spirits, walking dead and cackling witches. Von Drakk Ghost house lets you battle through the graveyards, spooky mansions and villages of this cursed realm. Von Drakk Ghost House expands your games of Super Dungeon Explore with 12 unique dungeon layouts and new creeps that are compatible with your existing dungeon tiles, ensuring no game is ever the same. Chapter One The First Trouble Unlike most boys, David dreaded the holidays. His parents were dead and he lived with his Great-Aunt Dot, Great-Uncle Bernard, their son Cousin Ronald and Cousin Ronald's wife Astrid; and all these four people insisted that he should be grateful for the way they looked after him. David tried to be grateful. They sent him to a boarding school which, as schools go, was not bad. Most holidays they arranged for him to go on an Educational Tour or to a Holiday Camp, and these were usually interesting enough to make up for David's not knowing any of the other boys who went on them. He did feel grateful when Cousin Ronald pointed out that he had opportunities which few other boys were given. But when he was at home in Ashbury and not on a Tour or at Camp, he found it much harder to be grateful. And the older he grew, the harder he found it. This particular summer no Tour or Camp seemed to have been arranged. Aunt Dot usually sent David a postcard before the end of term to tell him what Tour he was going on, and this time no postcard had come. David's heart sank a little on the way home, when he thought about it; but he was in a very cheerful mood and did not think about it much. He had taken five wickets for four runs in the match against Radley House, and had capped this by bowling his own games master middle stump, first ball, in the Staff match. it was enough to make anyone cheerful. Cousin Ronald was interested in cricket. He could tell Cousin Ronald all about it. The railway work-to-rule meant that David had to wait two hours for a train in Birmingham, but he was so happy thinking just how he would tell Cousin Ronald about those wickets that hedid not mind at all. He merely bought some bubble gum and sat cheerfully chewing as he thought. When his train drew in among the red houses of Ashbury, however, his heart sank another notch or so, and by the time he had changed from the Wednesday Hill bus to the Lockend bus, he was feeling definitely depressed. But as he stood up to get off the bus, he remembered that the Clarksons lived at the corner of the road, and cheered up a little. The Clarksons were the only children near and they were both younger than David, but they liked cricket and they were not bad fun, considering. The only trouble was that Aunt Dot said they were vulgar. David could never see why. He thought, as he climbed off the bus, that it was a habit of Aunt Dot's to call things vulgar -- like Kent at school calling everything spastic -- and it didn't mean a thing. As he turned the comer, David took a look over the Clarksons' front gate. There was none of the usual clutter of bicycles lying about, and someone had weeded the front drive and planted a lot of useless flowers. That was ominous. David's heart went down another notch. He walked on up the road and opened the gate to Uncle Bernard's big red house, where there were never any weeds, or bicycles, and lines of geraniums were drawn up li