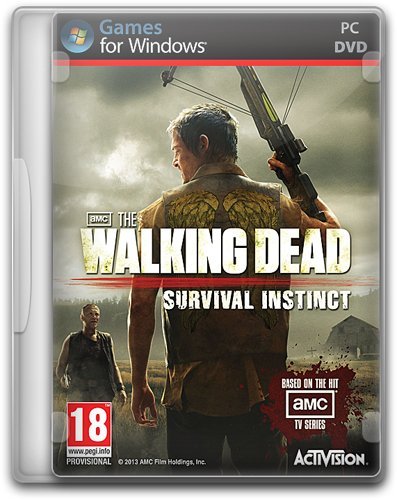 The Walking Dead: Survival Instinct is a do-whatever-you-need-to-survive first-person action game that brings the deep, character-driven world of AMC's EmmyAward-winning TV series onto console gaming systems and the PC. The game follows the mysterious, crossbow-wielding survivor Daryl Dixon, brought to life by TV series star Norman Reedus, alongside his overbearing brother Merle, voiced by Michael Rooker, on a haunting, unforgiving journey across the Georgia countryside. Players will need to tread carefully on this desperate quest, scrounging for food, water, and ammunition to survive against nightmares both living and undead.

The Walking Dead The Complete First Season (Xbox One)

Walking Dead Game of the Year Edition: Features the complete first season plus the special episode, 400 Days. Bonus download: Includes the original game soundtrack* The Walking Dead is an award-winning vision of Robert Kirkman's global hit comic book series. With over 80 Game of the Year Awards and numerous other accolades, this game of choice and consequence has made gamers around the world understand and experience the true horror and emotional impact of being a survivor of an undead apocalypse Play as Lee Everett, a convicted criminal, who has been given a second chance at life in a world devastated by the undead. With corpses returning to life and survivors stopping at nothing to maintain their own safety, protecting an orphaned girl named Clementine may offer him redemption in a world gone to hell. You will meet people and experience events that will impact the story of Deputy Sheriff Rick Grimes, and you'll be forced to make immediate decisions that are not only tough, but that will have a direct effect on the story you experience. You will have to live with the profound and lasting consequences of those decisions throughout the game. The undead are everywhere, but they're not your only problem. Starvation, betrayal, heartbreak and more will challenge you as you attempt to survive in the world of The Walking Dead. Winner of over 80 Game of the Year awards and two BAFTAs, including best story Average Metacritic rating of over 90% Based on Robert Kirkman's Eisner-Award winning series A tailored experience based on the decisions you make; your choices and actions change the game around you Horrific moral dilemmas to test you at every turn Unique visuals inspired by the comic book series A dark, suspense-filled and emotional adventure horror game unlike any other

You can't afford to rest! The Walking Dead: Survival Instinct players will have access to the Herd Mode, see how long you can survive against endless waves of walkers. In addition, fight off walkers in the story mode with a new arsenal of melee weapons including a survival knife, sawtoothed machete, kukri, reinforced hatchet, and advanced machete. How many frenzied flesh-eaters can you survive against before joining their ranks? Note: A New Game must be started to access the extra weapons. Requires Steam Client to activate. Requires the base game The Walking Dead: Survival Instinct to activate. System Requirements   Minimum Specifications: OS: Win 8, 7, Vista, and XP Processor: Intel Core 2 Duo E4400 @ 2.00 GHz or AMD Athlon 64 X2 4000+ @ 2.0 GHz processor or better RAM: 2 GB Hard Drive: 9 GB Video Card: AMD Radeon HD 4670 512MB or Nvidia Geforce 8800 GT 512MB or better Additional Info: DirectX 9.0C or later