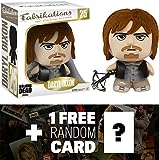 Funko Fabrikations is a crossover plush figure series by Funko and other famous franchises such as Disney, Pixar, DC Comics, Marvel Comics, Star Wars, Simpsons, South Park, Uglydoll, etc. Each plush figure is about 5" to 6" tall, and crafted in a Japanese anime/manga super-deformed style with a rotating head and often features a vinyl accessory. The Funko Fabrikations x The Walking Dead series feature characters from the hit TV drama, which tells the story of a small group of survivors living in the aftermath of a zombie apocalypse. Created with the collector in mind, and filled with a dense foam to achieve a high-end lush fee, the Funko Fabrikations series is the must have collectible items for Walking Dead fans.