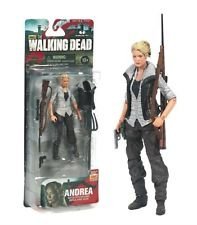 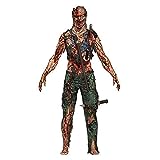 When first encountering a roaming zombie, not everyone instinctively knows what to do to kill it. Everything required trial and error, and one thing this Pin Cushion Zombie is familiar with is error. Whomever encountered this lumbering roamer obviously had no idea you were supposed to go for the brain (Duh). I'm sure this guy got a good snack for his troubles.

Carl GrimesBattle hardened from the loss of life around him, Carl Grimes was forced to grow up fast in this zombie-ridden apocalyptic world. Carl continues to be one of the most formidable survivors, yet struggles to retain his humanity because of it. While the Safe-Zone was being overrun by zombies, Douglas Monroe fired off frantic shots while being devoured...one of those stray bullets hit Carl in the eye, nearly killing him. Carl pulled through, but was left blinded and scarred on the right side of his face. Our figure features the bruised and battered Carl Grimes in his classic button up shirt, scarf, and two alternate heads - one displaying the bloody bandage wrapped around his head, as well as a head that shows the damage from the bullet. The figure also includes an assault rifle, and a removable sheriff hat.Abraham FordSgt. Abraham Ford is the definition of rough around the edges. Abraham's entourage cross paths with Rick's group of survivors while on their mission to deliver Dr. Eugene Porter (who has info that could save the world) to Washington D.C. Though Abraham initially clashes with Rick, he comes to accept the man as a friend, taking up the role of second-in-command and serving as a key enforcer within the group. Our figure depicts Abraham in his iconic white muscle shirt, fatigues and combat boots. Figures also includes an assault rifle, backpack, pistol and pitchfork.