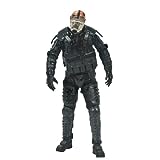 Series 4 Walking Dead TV action figures! Robert Kirkman's The Walking Dead, brought to life on screen and in action figure form! Fan-favorite characters from the AMC TV series. Interchangeable accessories and multiple points of articulation. Collect every blood-curdling one! Based off fan-favorite characters from the AMC TV version of Robert Kirkman's The Walking Dead, these 5-inch scale action figures sport interchangeable accessories and multiple points of articulation. Collect every blood-curdling one! This Series 4 set contains 5 individually packaged figures (subject to change): 1x Andrea 1x The Governor 1x Carl Grimes 1x Riot Gear Zombie 1x Riot Gear Gas Mask Zombie Strong-willed and capable of dispatching Walkers with an almost chilling ease, Andrea is an original member of the group of survivors led by Rick. Separated from her friends during the chaos at Hershel's farm, Andrea has fought hard to make it through a number of dark days - first with the aid of Michonne, and later against the sadistic will of her one-time lover, The Governor. This action-figure comes with 22 points of articulation, pistol with leg holster, sniper rifle, and pitchfork from Hershel's farm for fending off the undead. The charismatic leader of the seemingly utopian town of Woodbury, The Governor plays the role of stern, but just, leader - a hero and source of confidence and hope to the people he protects. But, the role he plays and the man he truly is are too very different things. Beneath his well-meaning facade is a man capable of acts of violence and dread that could make even a Walker's skin crawl. This action-figure includes 22 points of articulation, an alternate head without eye patch, pistol with hip holster, hunting knife with sheath, and large knife. The son of Rick and Lori Grimes, Carl has gone from being a reserved, fearful child to becoming a true battle-hardened Walker dispatcher.

AMCs The Walking Dead television series is now the most watched drama in basic cable history! Shattering records along the way with the release each new season. Season 3 finds Rick Grimes and his fellow survivors continuing to seek refuge in a desolate and post-apocalyptic world and soon discover that there are greater forces to fear than just the walking dead. The struggle to survive has never been so perilous and McFarlane Toys is sitting shotgun for the ride with its third series of AMCs The Walking Dead action figures.Each human figure features the exact likeness of the actor by using a 3D scanning process. And just like the first and second series of figures, each zombie included features an amazing attention to detail and unique play-action for maximum fun!