Munchkin 7: Cheat With Both Hands

Players really like to combine all their Munchkin sets. the stupider things get, the better. Heres the ultimate party kit for Munchkin fans. If your players want Now to play a combo Star Munchkin Cthulhu Booty Zombies game, they can. and they need Munchkin 7 Cheat With Both Hands. Cheat With Both Hands is designed for the anythinggoes games where every deck is in play and no combination is too strange. The fans told us they like to play that way heres the set to let them do it. This is a supplement, not a stand-alone game. It is meant to be combined with two or more Munchkin games, with or without other supplements. Earlier versions of these cards, with a different card back design, were released as Munchkin Blender. This set has standard Munchkin card backs. Description: 112 cards and rules, in a tuckbox. 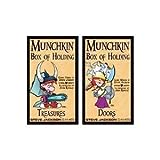 You liked the “Dungeon” cards - so here’s a set for Munchkin Zombies! Nowhere Is Safe From The Munchkins! The smash Munchkin hit of 2011 was Munchkin Zombies -- the fans liked it so much that it’s gone back for two printings in less than a year! Now, this new set introduces the popular double-sized “Dungeon” cards to the Zombies genre. In Hideous Hideouts, the “Dungeons” become places where the zombies can find more yummy braaaaaains! Fort Deadly, the Creepy Isolated Cabin of the Dead, Resurrecticon . . . you get the idea. And cards like Breach the Perimeter and Walking in Circles will keep the band of hungry undead on the move as they hunt for tasty, tasty survivors. This is an expansion for Munchkin Zombies. It is not a stand-alone game. Description: 20 double-sized cards, 16 standard-sized cards. More great John Kovalic art, and lots more zombie jokes! And BRAAAAAIIIINNNNSSS.

Return of the (un)Living Munchkins! Munchkin Zombies is a hit – we had to order a second printing less than a month after its release! And the fans demanded more! Who are we to argue? Munchkin Zombies 2 – Armed and Dangerous includes 112 new cards for Munchkin Zombies. Players can wield their Trained Attack Flies and Prehensile Tongue against the Zombie Gamer, or be the Rankest of the Rank and use the Power of SCIENCE against the dread Survivalist. Includes a new Power, “Hungry,” and a new Mojo . . . the Patchwork Zombie! This is an expansion for Munchkin Zombies. It is not a stand-alone game. Description: 112 cards in a tuckbox.

When Munchkin Dice went out of print, some really great cards became unavailable. Now they're back as a new booster pack: Munchkin Reloaded! All the fan favorite cards have returned: the Race modifiers Dark and High, the class modifier Master, and of course the Reloaded Die (and we threw in an extra one, too!). This set also features the classic card Rocks Fall, Everyone Dies, from the virtual pages of Randy Milholland's hit webcomic Something*Positive. And of course, all the art is now in full color! Munchkin Reloaded!: 15 cards every true Munchkin fan wants to kill monsters with!

This is a core set and requires no other Munchkin set to play. Includes 168 cards, one six-sided die, and a rulesheet. Not even death can stop your Munchkin game! Steve Jackson's macabre card ideas and John Kovalic's disgusting art . . . what more do you need to know? 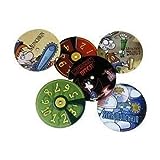 The best Munchkin fights are the ones where everyone plays cards to keep the levels bouncing up and down! But it can be hard to keep track. Now you'll never have to stop and recount again! With the Munchkin Zombies Kill-O-Meter, whenever a card hits the table, you turn the dials to keep track of your new total. No braaaaaiiins required.

Braaiiinns. Its the sickest, silliest Munchkin yet. The players are zombies, kicking down doors and eating brains. The monsters theyre attacking are people, some helpless and some hazardous, with a few rogue zombies thrown in. The armor is whatever theyve blundered across during their lurching search for brains. So bravely the munchkins go forth, with mousetraps on their feet and a bowling trophy protecting their poor rotting heads to level up, or to die. Again.